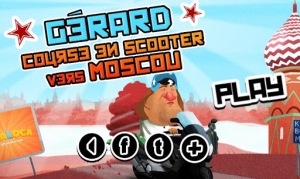 In this morning (when I write this article) I did receive a request for a review. Most of the requested reviews are not for very good apps and I end to not even publish anything about it. But sometimes I find that the App is great and fun like this one.

Gerard Scooter is an Android game. Is something like Mario game but with a french guy on a scooter. If this is not enough the scooter and the french guy run on wine bottles with the help of the TMAX 500 carburetor and it run from the France tax agents. (Is this a hint about how much are taxes in France?)

Back to the game review. In his running Gerard head to another country with lower taxes but the road have alot of hills and valleys witch make game more interesting.

Help Gerard go as fast as you can and collect wine bottles. Take very care to him not to fall from the scooter and and in the process make fantastic stunts. Collect the upgrades left on the road witch make you go faster. And … help him go as far as you can.

“You get a nice rebate for Gerard’s taxes if you reach the 9500 meters.”

In the review process I did test it on a HTC One S and played about an hour, until the finaly had the will to move to the computer and write this review. I did not experienced any lags or something like that and this game is realy fun to play. However the app author mention in the game description that a simple app restart will solve the lags on most of the phones.

Now end with the talkings lets watch the movie with the Gerard Scooter gameplay.

PS: Is me or this game want to talk about the French actor Gérard Depardieu who go to the Russia to escape from French Taxes?